What was the secret to Goguryeo’s early success? Some people would say that the mountainous land created a robust people that managed to withstand much and strike back with much force. This, combined with strong and intelligent early rulers like Jumong and Daemusin, guaranteed Goguryeo’s dominance of the northern region of the Korean peninsula. Others cite the geography made it easy for the Goguryeo people to grow in power. After all, the other stronger powers of the region- Silla, Gaya and Baekje- competed for space in the much more crowded  south, Goguryeo managed to occupy a vast region with few challenges to its existence. This allowed the budding kingdom to grow without being trampled on.

The stories that come from the early Goguryeo rulers makes the country sound like a Sparta, full of men who were trained from a young age to love warfare and despise culture. That’s not exactly accurate. Even at the early stages, Goguryeo did have a rich culture based on traditional spirit worship and shamanism. Early records of Goguryeo paint a picture of jovial people, who had many festivals involving singing, dancing, and the brewing of alcohol. One of the biggest artistic legacies of the kingdom is the tomb murals. Tombs of important people were filled with paintings of various religious and shamanistic symbols which show a not unskillful degree of artistic ability. 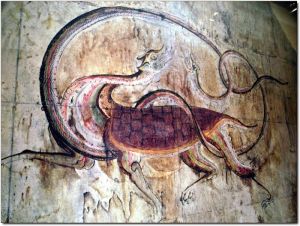 But food shortage was still an issue. The land was such that it required a lot of energy to plant crops with little yeild. Conquering lands was all well and good, there still needed to be a more sustainable way of governing. A more centralized reign would help distribute food and organize the people more efficiently, and that was the work of the 6th king of Goguryeo. The posthumous name given to the king is telling. His title “Taejo” means “Great Ancestor” and is generally given to the first or second kings of a dynasty. This seems to indicate that he is credited with making Goguryeo a well functioning state.

With the unexpected death of Daemusin, power passed on to his brother. That king only lasted 4 years before passing away, and the next king in line was Mobon. Mobon is a very contradictory figure, for although we hear of him distributing food to people in need, we also hear of him being a tyranical leader. He did not last long either, and was assassinated 5 years into his reign. Mobon’s crown prince was also denied the throne. So who next? The ministers looked at Mobon’s brother, Jaesa. The man declined, stating his old age as the reason why he could not rule. However, Jaesa did suggest his son. And so, with his mother as regent, King Taejo took the throne at 7 years old, where he would stay for an impressive (and disputed) 94 years.

Why was succession so complicated? There is a lot of controversy regarding Mobon’s reign, a controversy that started with King Yuri. Jumong’s family name and the name of his dynasty was ‘Go,’ and yet when Yuri took power, he changed the king’s name to ‘Hae.’ This is one of the reasons why some historians consider Yuri a usurper, since ‘Hae’ was the royal family name of the Buyeo kings. After Mobon’s death, though, Jaesa’s family switched back to ‘Go.’ Why the change of names? Was it really an issue of usurpation? It’s still a mystery.

Taejo’s rule saw even more expansion of Goguryeo’s territory. Taking the throne in 53 CE, he started absorbing neighboring states under his authority, starting with Eastern Okje in the year 56. In the next twenty years, a handful of states were now under Goguryeo control. The expansion went all the way down to the Salsu river, which shall have great significance to Korea at a later date. All this expansion is a great accomplishment for any kingdom, but Taejo went a step further to consolidate all the land and powers. He installed a bureaucratic system which would be followed by successive Korean kingdoms.

Local clans had always played a role in the politics of the court, and Taejo used them to centralize his rule. He re-organized the kingdom into five districts- North, South, East, West and Center- and had five local clans rule these districts. Taejo put himself in the center of this system, and now the court managed to keep a close eye on the aristocracy and the people. More than that, he also established a tributary relationship with other smaller tribes. Although the smaller states were under the rule of Goguryeo, they were left to their own devices as long as they paid tribute. In a sense, Goguryeo had become a small empire. No wonder Taejo is the ‘Great Ancestor’ of Goguryeo.

And so Taejo enjoyed a long rule. Incredulously long, since if we were to believe the claim that he had reigned for 94 years, that means he would have died at the age of 118. Some revision of the dating has placed Taejo’s reign at 68 years. This is still quite a long time for a monarch to stay in power,  a rule even longer than that of Queen Victoria’s.

It was a little too long for some people’s liking. By the (alleged) 80th year, Taejo’s brother Susong was already plotting. For the following years he and other potential contenders to the throne went on hunting trips, where they argued about what to do with this king that simply refuses to die. Susong bid his time, eliminating those contenders, while finally in the last year of Taejo’s reign, the younger brother had had enough.

Susong went on a hunting trip with his attendants, announcing that “His Majesty is old but he still does not die. But since I too am growing older; I cannot wait. All I wish is that you, my followers, would plan something for me.”

The king heard of this plan of rebellion. This could’ve been the beginning of a conflict between the two brothers, but Taejo made a decision which surprised his court. He decided to abdicate the throne and let his brother become king. The court tries to dissuade him. How could a rebel be given the throne so easily? Taejo tried to reassure them, but a councilor named Bokjang tried to reason with the king.

Although well accomplished, Taejo might have been a little too rash in his decision to give kingship to Susong. As the minister had feared, trouble certainly was about to be bequeathed to the people.

3 thoughts on “10. Birth of a Kingdom: Taejo of Goguryeo”